A view of Malé, capital of Maldives.

The 2018 presidential elections marked a turning point for Maldives. Ibrahim Mohamed Solih’s surprise victory promises to usher in a new era of stability and transparency in a business-friendly environment

The scene as the election results came in was jubilant. Even many supporters were shocked by the overwhelming victory of Maldives’ new president, Ibrahim Mohamed Solih, last September.

The small island nation, famed internationally for its idyllic beaches and world-class tourism, had also been making headlines in recent years due to political instability. But last year’s elections and the peaceful exchange of power sent a strong signal that Maldives is back on solid footing.

“I think of it all like the winds. If people feel the winds are good, then they’ll come and invest or visit as a tourist. But if the winds are turbulent, they anticipate that something bad is on its way,” says Ali Waheed, the Maldivian minister of tourism. “Now, there is just a nice, light breeze. You don’t see protests anymore. It’s a stable, calm country.”

One of the main goals of the new administration is to reignite investment into the Maldivian economy by boosting transparency and putting new safeguards on those investments.

“Over recent years, the past government carried out contracting processes in secret. We want to make this process more transparent and make it easier for companies to come to Maldives. We have a zero-tolerance policy on corruption, and I think that is something that investors are looking for,” says Minister of Finance Ibrahim Ameer.

In recent decades, Maldives has been one of the world’s greatest development success stories. According to the World Bank, the country’s GDP per capita in 2017 was $11,151, compared to just $200 in 1978. In 2018, GDP growth reached 7.6%, and President Solih says he expects that rate can be sustained throughout 2019.

Also at the top of the new administration’s to-do list is rekindling relationships abroad.

“In a world made smaller by globalization, it is imperative that a small island state such as the Maldives build and sustain its diplomatic capital by cultivating amicable ties with as many countries as possible,” said President Solih in his 2019 state of the nation address. 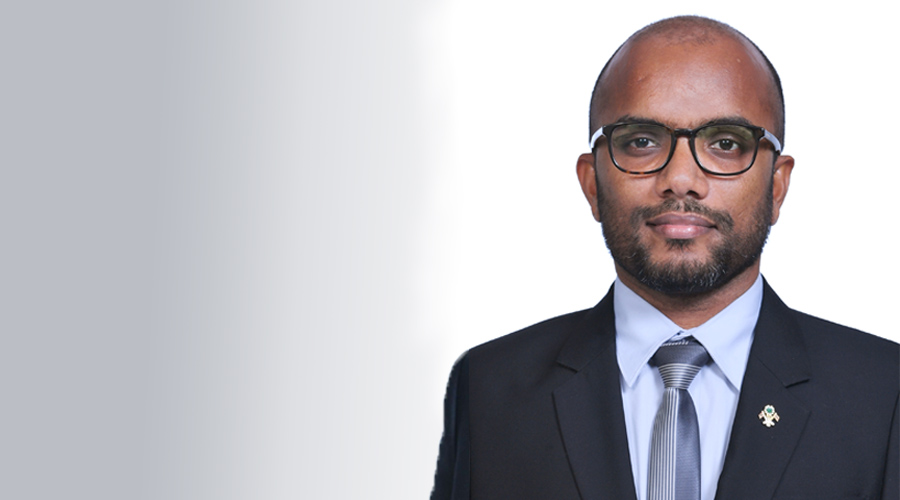 The UAE was the second foreign country the new president visited after taking office. During the official trip, President Solih met with His Highness Sheikh Mohammed bin Zayed Al Nahyan and other high-level officials stating Maldives’ commitment to strengthen and diversify existing relations. The UAE is not only Maldives’ top source of imports (with imports predicted to increase 27% between 2017 and 2019, according to the Ministry of Finance), but it also enjoys close links in terms of religion and culture.

Since September, UAE-Maldives ties have been visibly enhanced. The UAE government enacted visa-free travel for Maldivians at the start of this year, and the two governments signed memoranda of understanding on renewable energy and the establishment of a Joint Cooperation Committee. In March, the UAE’s first-ever ambassador to Maldives presented his credentials to the Maldivian president in Malé.

“The key is to facilitate trade and investment between the two countries,” says Uz. Fayyaz Ismail, Maldives’ minister of economic development. “We have built up a good relationship with traders in Dubai and the UAE in general, and we know that we have many synergies in terms of investments and the tourism sector.” 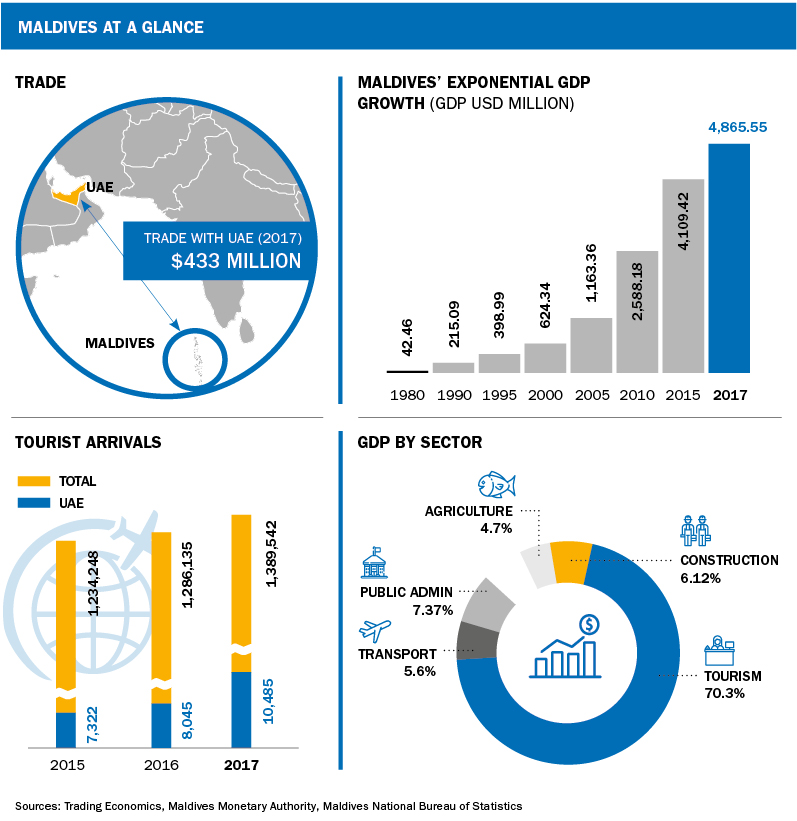 Around 70 percent of Maldives’ economy relies on the tourism sector, which the government is priming for investment to meet its ambitious target to nearly double arrivals by 2023. Not only is the government more than tripling its tourism marketing budget, but a new project to allow development on around 100 more islands is set to spur massive investment over the next few years. According to the Ministry of Finance, the typical resort investment is recovered within eight years, and the grand openings of 20 new resorts are slated for this year alone. Gulf investors are also encouraged to discover diverse opportunities in construction, energy, fisheries and agriculture. The plans for a new main port in Thilafushi are also underway, and foreign companies and investors are invited to explore the new possibilities.

Related Articles
OVERVIEW
We use cookies to ensure that we give you the best experience on our website. If you continue to use this site we will assume that you are happy with it.Ok